You are in:  Home » Research

Current research in the group includes glacial, periglacial, interglacial and post-glacial stratigraphy, sedimentation, palaeoenvironment and structure in southern Britain, north-western, central-eastern and southern Europe and the southern North Sea, fluvial sedimentation, particularly the history of southern British and lowland NW European rivers; and also late Cenozoic palaeoceanography of the North Atlantic and contiguous seas. We use multi-proxy approaches, combining both floral and faunal fossil analyses, together with sedimentary magnetic and geochemical evidence, to reconstruct past environmental history from a range of environments.

A central theme is the palynology of both shallow and deep-water marine sequences using pollen, dinoflagellate cyst and foraminiferal analyses. They include investigation of the Baltic Sea palaeoenvironmental development during the Last Interglacial (BALTEEM-project: funded by EC), dinoflagellate-cyst analysis of the Early/Middle Pleistocene boundary in the Mediterranean Sea (funded by the Greek Government), Pliocene dinoflagellate-cyst taxonomy, biostratigraphy, palaeoecology, and sequence stratigraphy of the North Sea, Mediterranean Sea and North Atlantic Ocean (funded by the Cambridge Gates Foundation, and British Gas), Miocene dinoflagellate cyst biostratigraphy of the North Sea, Central Paratethys, and the Gulf of Suez (funded by Shell Petroleum), Holocene marine biostratigraphy and glaciation of southern Chile (funded by the Chilean Government and the University of Cambridge), and sea-level change in southern Thailand (NERC).

Work in southern Europe includes the derivation of high-resolution records from lacustrine sequences in eastern Greece spanning the last glacial cycle and the Holocene (funded by the Onassis Foundation), early Pleistocene in northern Italy, as well as glaciation in the Greek mountains (funded by University of Cambridge), and estuarine sedimentation in Portugal (NERC).

In eastern Europe we are currently investigating early and late Holocene palynology and hydrography of the Black and Aral seas, tephrachronology and palynology of the eastern Black Sea (NERC) and the reconstruction of late Cenozoic drainage history in Poland, Russia and Ukraine (EREP project funded by IUGS).

General glacial research has focused on the unravelling of Late Pleistocene glacial events in the Great Lakes region (USA - Canada) and westernmost Russia (funded by the Academy of Finland). Mapping of world-wide glacial chronology and extent (funded by INQUA).

In the data management, modelling area, we are working on a global database on late Quaternary fluvial activity (funded by the Max Planck Institute, Jena), serving the Palaeoclimate Modelling Intercomparison Project (PMIP), with the University of Bristol. We are also undertaking three-dimensional landscape modelling and data manipulation

The QPG carries out a great deal of work on a number of themes. Some principal strands are as follows: 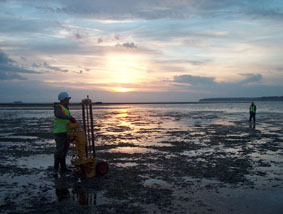 Setting up the Minute Man mobile drill on the Solent foreshore at Lepe, Hampshire at sunrise during a springtide low.